Get in the Know: The Most Popular Social Media Advertising Products Available

Home Posts Get in the Know: The Most Popular Social Media Advertising Products Available

It’s common knowledge that any organization can—and should—set up free social media accounts to start organically reaching individuals without spending a dime. So, that’s all businesses can do with social media, right?

What if I told you that you can capitalize on thousands of potentially, untapped consumers (who have a need for your products) at a lower cost than traditional marketing mediums? This is where social media advertising comes in.

In this article, I discuss the most popular social media advertising platforms and their capabilities.

Anybody who has seen the movie The Social Network knows that Mark Zuckerberg wanted Facebook to become popular before it started generating revenue. Well, it became incredibly popular and now they offer one of the most customizable and advanced social media advertising platforms in the world. Let’s take a look at some of the different advertising products you can utilize with Facebook.

Boosted posts are the easiest and most straightforward advertisement offered by Facebook. You simply take your organic post and expand its reach by promoting it to a select audience of your choosing. Essentially, these posts feature whatever you want them to—anything from website links, to pictures, to just plain old text. 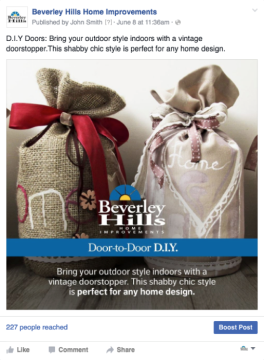 Fig. 1 – A Facebook Post for one of tbk Creative’s clients, Beverley Hills Home Improvements that is eligible to be boosted.

Due to their easy and customizable nature, promoted posts are one of the most commonly used advertisements on Facebook. On a desktop browser, these ads typically appear in the News Feed and/or the right-hand column.

While they’re similar to natural posts (with a few added features), promoted posts are strictly advertisements and don’t appear on your timeline. Add a photo/video, a link to your website, some text, a headline, a call to action, a news feed link description, and—Voilà—you have a Facebook ad.

Compared to boosted posts, one of the biggest benefits is that you can make multiple versions (with small tweaks to images, ad copy, call to actions, etc.) while not overwhelming your timeline and, thus, your followers. This method is also good for variant testing (A/B). 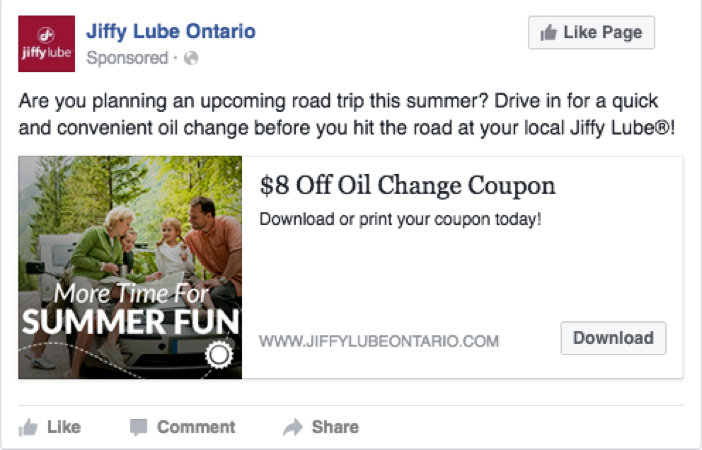 Do you know what’s better than one photo on your Facebook advertisement? Five of them! This is where Facebook Carousel Ads come in. They allow you to have all the benefits of a regular promoted post advertisement, but with 5 photos/videos, 5 headlines, 5 descriptions, and 5 call to actions! Carousel ads also allow you to tell a story while the user scrolls through the advertisement.

Fig. 3 – A Facebook Carousal Ad for one of tbk Creative’s clients, Sundance Balloons.

One of the newer additions to the Facebook advertisement family is in-platform lead generation forms. In order to fill out a form, the majority of businesses send users to their website as either a hard or soft conversion; however, Facebook said “hold up, we can make this easier,” and introduced an advertisement product that, when clicked, opens a form in Facebook the user can fill out. The forms are completely customizable and come prefilled with information the user previously provided to Facebook. The advertiser can then link the form into their customer relationship management (CRM) software—so the data is available in real time—or go into Facebook’s publishing tools and download an excel copy.

In early 2016, Facebook launched the most advanced and complete of all its advertising options: Facebook Canvas (which has such a mysterious, intriguing ring to it). Facebook Canvas is a mobile-only, full screen, rich media page that prevents users from having to wait to load a webpage. Here’s what happens: when users click on a regular in-feed advertisement, they’re brought to the company’s Canvas instead of their website.

Creating a Canvas is easy; they consist of the following eight elements:

Canvas ads are being adopted by big and small brands alike who wish to tell consumers their story in a user-friendly format while eliminating long load times for mobile webpages. 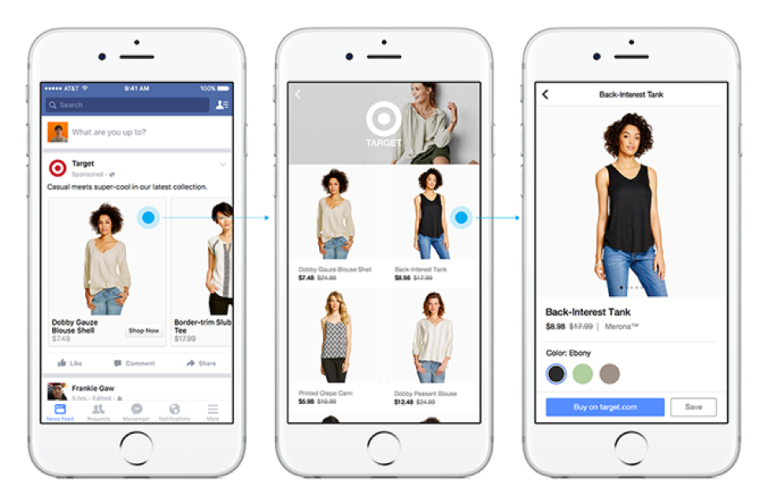 Who knew that a platform that directly limits how you communicate would become so popular. Well, somehow they did as there are currently over 320 million active Twitter users. And, because of this massive boom in users, Twitter advertisements were introduced.

The following ad products are Twitter features you need to know about:

Similar to Facebook’s boosted posts, boosted tweets are previous tweets whose reach you want to expand. These tweets can include photos, videos, links to apps, simple text, and website links.

Similar to Facebook Promoted Posts, this advertising product helps create tweets whose sole purpose is advertising (so they won’t show up on your main Twitter feed). While you still have the same character restrictions as a regular tweet, now you’re allowed to add a custom headline that is under 70 characters. These tweets have a number of different objectives, including the following: increasing follower count, increasing follower engagement, driving traffic to your website, app installs, and videos views.

Similar to Facebook’s Lead Generation, these tweets allow for in-platform collection of user data. The same character restrictions are in effect, however, you’re allowed to add a 20-character call to action and a 50-character description of why the user should provide their information. You must also provide a link to your company’s privacy policy that states how user information will be used.

With social networking becoming so popular, Facebook knew it had to remain progressive if it wanted to stay in the competition. One of the numerous acquisitions the company has made was for the photo-sharing giant, Instagram. The rich media sharing platform, which allows users to share pictures and short videos with followers all over the world, has become one of the most popular social media platforms available.

Similar to Facebook and Twitter, Instagram Boosted Posts are for previously made posts whose reach you’d like to increase. This is helpful when you become limited by the amount of individuals you can reach organically. 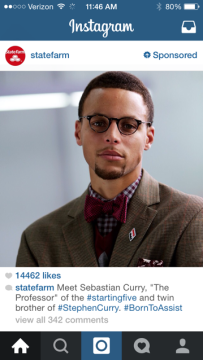 This type of advertisement allows you to post an engaging picture/video related to your product (or service) that will entice the user to convert. These posts don’t appear on your profile page, allowing you to create as many as you want without overwhelming your feed. Essentially, you’re allowed to add an endless text description to your post that has more characters than any advertiser would need to use. You’re also provided with a list of call to actions you can choose from. 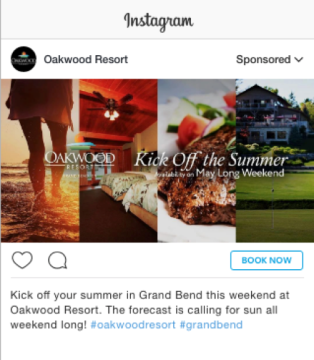 The newest addition to Instagram ads is the use of multiple photos/videos within a post to further engage and intrigue users. After Facebook introduced its Carousel Ad, it was only a matter of time before Instagram did as well. Both products share several of the same features with only one main difference: while Instagram allows you to add 10 photos to your Instagram ads (they pick the top five performing pictures or videos for you), Facebook only allows you to pick five (and they don’t select your highest performing images). Furthermore, with Carousel Ads, you’re allowed to offer a display URL that slightly differs from your final URL. 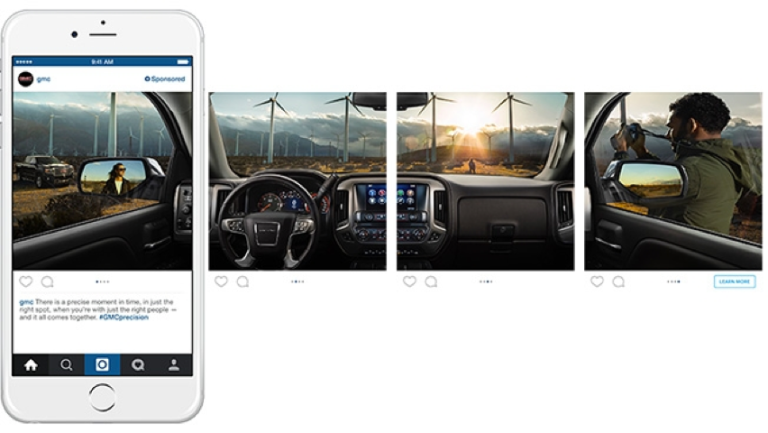 Similar to the aforementioned platforms, these are previously made posts you enjoy so much you want more people to see them. LinkedIn offers some incredible targeting options and, in terms of targeting capabilities, is currently tied with Facebook as my favourite platform. On LinkedIn, you can target your audience based on location, specific companies, industries, company sizes, job seniority, years of experience—the list goes on and on. Furthermore, unlike the other platforms, LinkedIn currently doesn’t offer promoted posts so, unless you’d like to go with the text ads mentioned below, this is your only option. 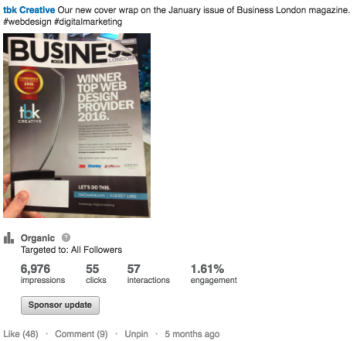 Fig. 12 – A LinkedIn Post from tbk Creative’s LinkedIn page that is eligible to be boosted.

If you’re familiar with Google or Bing Search Ads, the concept of LinkedIn Text Ads will be easy to understand. LinkedIn Text Ads are structured displays of text with an image that are displayed throughout LinkedIn. You can also add a 25-character headline, a 75-character body copy, and an image to these ads; then, you can decide if you want traffic driven to your website or your LinkedIn profile. Once complete, these ads will be displayed across the horizontal bar, the right sidebar, or the long horizontal bar. Oh, and don’t you worry, that incredibly granular targeting mentioned above is also available for these ads. The above social networking websites offer a diverse selection of types of audience targeting and advertising products that, if used, will grow awareness for your products or services.

Need help with social advertising or other web design and digital marketing? Feel free to reach out to my team at tbk Creative and we’ll be happy to assist.