OE Canada is Southwestern Ontario’s largest independent printer sales and leasing company and has been operating for over 30 years.

In December 2017, OE Canada reached out to tbk to develop its new corporate website. Little did either party know that what started as a conversation about a new website would turn out to be a comprehensive ascension of the company’s brand.

The printer sales sector is in a state of ongoing flux: printing paper within companies, on average, is decreasing yet paper is still a vital aspect of a company’s operations. Printer sales companies are also moving into document storage software services as a way to hedge and plan for the future.

In preparation for this future, the incumbent OE Canada website at the time focused much on broad terms like “office solutions” and their various software. However, the term “printer” couldn’t be found on its homepage.

This lack of focus on printers was actually causing the company to not even show up on Page 1 in Google in the region when people would Google terms like “lease a printer London Ontario.”

When tbk’s CEO & Chief Creative Officer, Melissa McInerney, and team visited OE Canada’s east London office for the first time, Melissa still wasn’t quite sure the type of business they were in. It wasn’t until she entered their boardroom was it clear—along the perimeter of the boardroom was a row of modern and elegant printers from brands such as HP, Lexmark and Toshiba.

At the heart of it, this is a company that still sells and leases printers.

OE Canada and tbk discussed the company’s brand and the sector for most of the first meeting. That winter afternoon the firms knew they would begin a relationship together and although what started out as a corporate website conversation, it was agreed that a new brand position would be established for OE Canada. Shortly after paperwork was signed, the firms went to work on this branding and digital voyage.

The task at hand was to rebrand the company to acknowledge its current modern software services – PaperCut and DocuWare, but also keep the main focus of the brand and communications on the fact that the company sells and leases printers to other companies.

Through market research we noticed printing companies were gradually shying away from acknowledging themselves as printer leasing and sales companies, yet the bulk of their revenue still comes from printing paper; and companies still need paper.

tbk built a brand strategy that would zero in and illuminate what built the OE Canada business over three decades: printing.

Inside of this focus, we took OE Canada through a brand identity process we have used with dozens of previous clients called A Content Conversation™—its output is creating a new brand position, about write-ups, brand statements, and multiple headlines. Sample headlines that were created through this process included:

In developing the new website we chose WordPress, the world’s most popular content management system, which is well-known for how well it interacts with custom high-fidelity artwork files and its ease of use to maintain content for internal staff. For the design tone of the new website and brand, we went with a “California-tech” style. Although OE Canada was a printing company, they were absolutely a modern one.

The message was bimodal: They are amongst Canada’s best providers of printers but also can serve a company’s document management needs through software services such as PaperCut and DocuWare.

As we developed the website, we began weaving the new brand identity throughout.

The company’s new tagline became Ink Differently™; this tagline would not only be used above the fold in the hero banner image but on much of the company’s collateral throughout.

We weaved aphorisms throughout the main page that worked well with the purpose of the section.

Here are some examples.

Print Boldly to introduce the brand:

Long Live the Printer to introduce their printers:

Inking Outside the Box to introduce several cells that communicate the features and benefits of using OE Canada’s products and services:

Great Minds Ink Alike to introduce some of their clients:

OE Canada and tbk didn’t finish there. Paper is necessary for most companies in the world to still operate but everyone is aware that trees used to produce it. In addition to this new brand identity, tbk proposed a Plant a Tree program where OE Canada now plants a tree every time it sells a printer.

OE Canada would tell you that their previous website would net a few qualified leads per year. Their new website, infused with this new brand identity and an overarching crystallization of their products and services, now generates hundreds of leads per year. 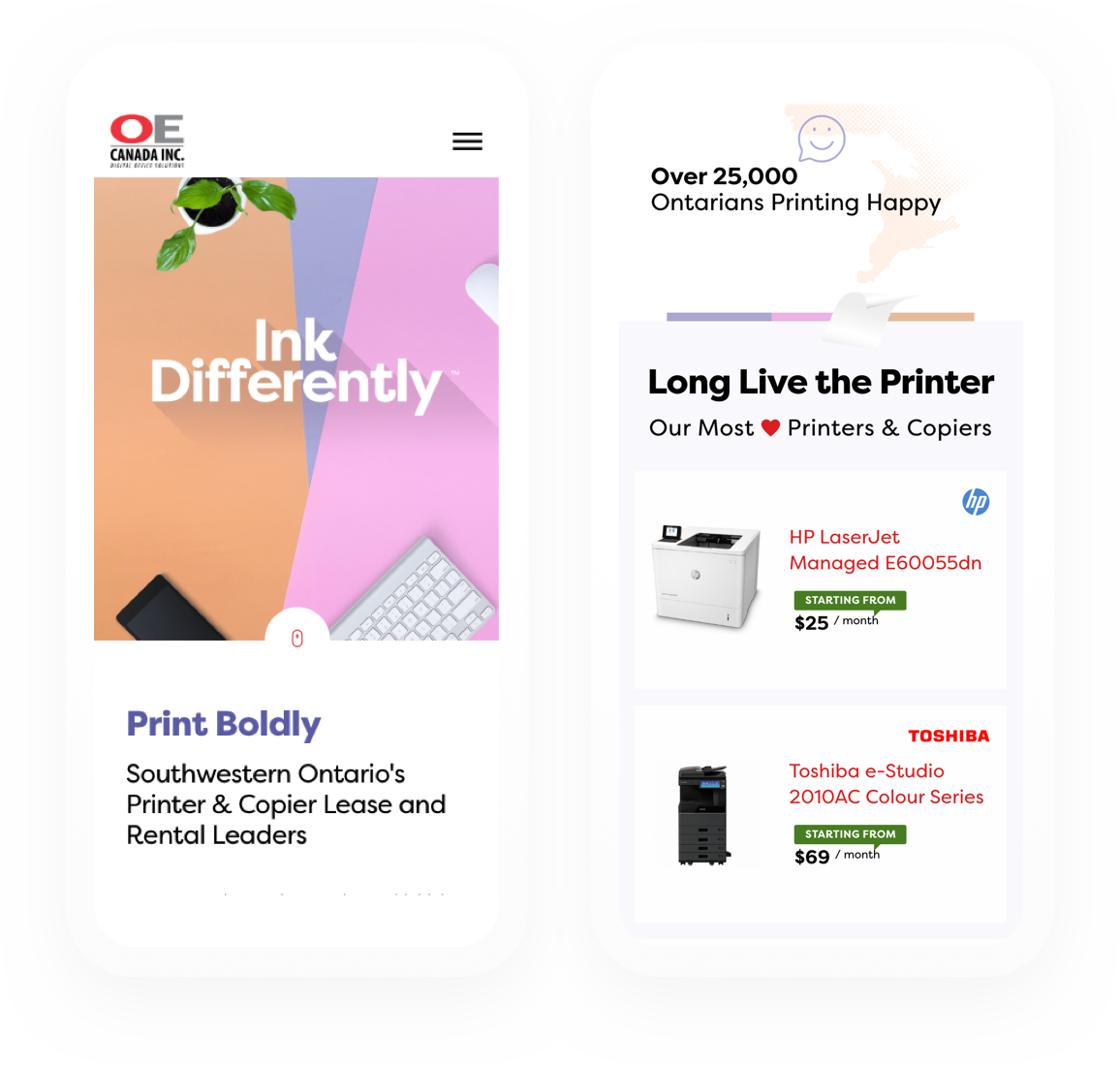 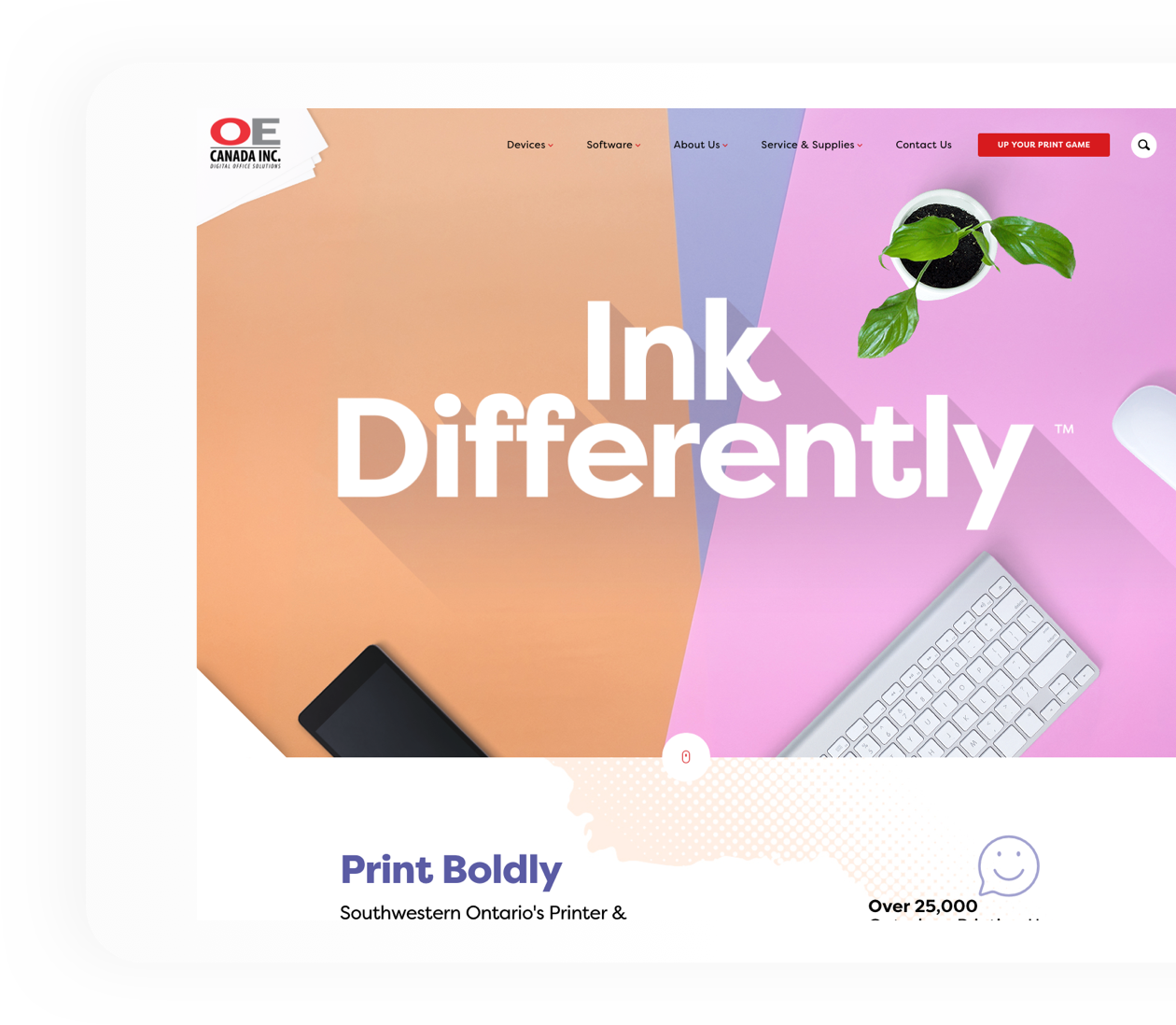 This Client Retention statistic is based on the number of active clients at tbk in 2020 who commenced their services in 2018-2019.
We thoroughly enjoyed working with the team and their professionalism from start to finish.

“The tbk team was extremely thorough in getting to know us, our business and from there, really putting their collective minds together to design and analyze the new website to ensure the user experience was optimal. In my work experience, I have generally found website projects to be extremely daunting and difficult to track the development progress and revisions. The tbk process was seamless with efficient tools to mark up comments on the staging site, a ticket system to track a lengthy list of coinciding changes, ensuring that all edits were captured. We thoroughly enjoyed working with the team and their professionalism from start to finish.”